Had I been actively blogging during the holidays, I most assuredly would have put together several posts about commercials that annoy me.  Especially all those perfume and cologne ads…

But it’s summertime and commercials have been relatively bland.  In the midst of all this banal advertising, one commercial has managed to make me groan in horrible pain everytime it plays on screen. And that honor goes to… the current McDonald’s oatmeal commercial.

If you are unfamiliar with this commercial, spend 30 seconds and watch it below.  Go ahead. I’ll wait.

Done? I bet that is 30 seconds of your life you now want back.

Okay, now back to me. This commercial annoys me for several reasons. Let me break it down:

Annoyance #1: The Product Itself

If I have to go to McDonald’s for breakfast, you can bet I’m going to order something full of grease and calories…not something that takes me 60 seconds to make at home. Otherwise, what’s the point of stopping at a restaurant for breakfast? I might as well stay home and eat Cheerios with milk.

But seriously, who doesn’t have time to open a packet of instant oatmeal, throw it in bowl with some water and zap it in the microwave for a minute.  I think it would take longer to stop at McDonald’s, park, go inside, order the oatmeal, wait for the oatmeal, eat the oatmeal, then walk back to your car.

Even if you go through the drive-thru, you have to yell at the speaker to order your oatmeal, pay the cashier at the first drive up window, pull up to the next window, get your oatmeal, and make your way back into traffic.  Either way, you still have to spend more than one minute to get your oatmeal.

I don’t know if it’s the acting or the horrible dialogue these two women were made to recite, but the whole exchange seems so unnatural.  The younger woman comes across like a doormat and the older woman seems so pushy and nosy. The younger woman in the commercial seems content to let this other woman hover over her while she is trying to eat.  The lines recited from the older woman seem too rehearsed (especially the “oat and meal” line).   I wouldn’t want to eat my breakfast near either of them.

Annoyance #3: Making a Big Deal out of Topping Oatmeal with Fruit

The older woman makes a big deal about “all that la-di-da” on top of the oatmeal.  I get it, McDonald’s is trying to pass this off as “special” or “gourmet” oatmeal. But come on…I grew up in the 80’s and I guess I always given “fancy pants” oatmeal.  Oatmeal in my house always had some combination of cream, brown sugar or honey, cinammon, and raisins mixed into the oatmeal.  Every job I’ve ever held that had a cafeteria always sold oatmeal with some combination of strawberries, blueberries and granola as topping for oatmeal.

McDonald’s, this is by no means a culinary revolution.  Stop trying to act like it is.

Annoyance #4: The Older Woman Blogs a Photo of the Oatmeal and it Goes Viral in 2 Seconds.

As a blogger, this part really annoys the oatmeal out of me.  The older woman takes a picture of the oatmeal and two seconds later we’re supposed to believe that she has already posted the picture to her blog and thousands of people are clicking on it?

First of all, such a blog post would be so basic. I image it would look something like this: 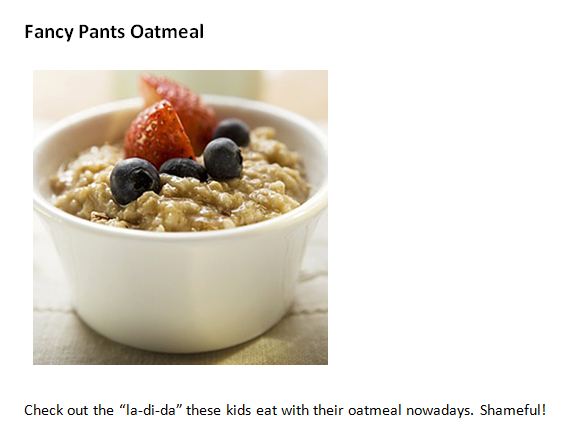 If a blog post like this goes viral, then clearly I have no idea what I’m doing as a blogger.  I should just start taking picutre of basic things and put one liners under them. Like this: 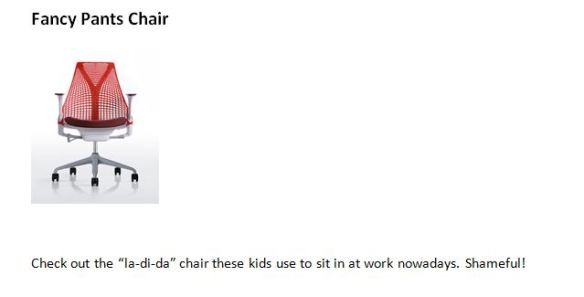 Yep.  I guess I’ve been overthinking this blogging thing.  Who needs “fancy pants” things like “words” and “thought” when you have oatmeal.  UPDATE: I don’t have a problem with people blogging about mundane items.  Rather it’s the magic of TV that makes it look like blogging is so dang easy. The point I’m trying to make is that even a very simple blog entry takes AT LEAST 5 minutes (and that assumes WP isn’t acting erratic).

In summary, I guess all I can really say about the new McDonalds Blueberry Banana Nut Oatmeal and their train wreck of a commercial is:

3 thoughts on “Commercials That Annoy Me: McDonald’s Oatmeal”